The Hearing Protection Act and The Rise of Mainstream Suppressors 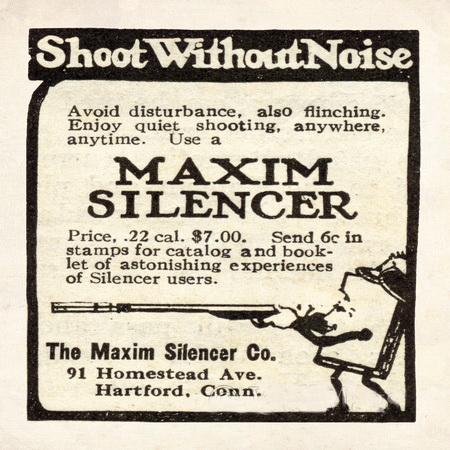 Capturing the Future in a Can

They call it the “Hearing Protection Act.”  Not only is it an exciting possibility to expand gun rights, but it’s a fantastic illustration of how you should ready your business for revolutionary changes.

It’s not unusual to see tantalizing proposals for legislation that promises to expand our gun rights.  They usually go nowhere.  But there’s one proposal that has hit the news that might just be the right thing at the right time.  The typical reaction to this no-brainer proposal from industry insiders and knowledgeable shooters is: “It’s about @*!#& time!”

Currently, suppressors fill a small market of rich and patient guys who enjoy cool and controversial toys.  To buy, they have to pay high prices for small production, a $200 tax, endure paperwork headaches and a wait that can be the better part of a year until one gets his hands on the toy he paid for.  That’s a pretty small market.  It turns out to be about 500,000 per year.

Imagine expanding that market to every hunter, plinker, target shooter, home defense buyer, and even concealed carrier.  Imagine if the process of buying was as easy as buying a pistol, the gear was in stock to take home today, it was essentially tax free, and the price was a fraction of today’s prices.  Thanks to the Hearing Protection Act the market might increase by more than a factor of ten, and perhaps much more at the outset as a hundred million gun owners decided to protect their ears.

There was a day when the average person thought suppressors were for criminals, like in the old movies.  There was also a day when the average person thought that anyone concealing a handgun must be a criminal.  Times change, and perceptions change.  I hazily recall only about a dozen years ago when the venerable Jonathan Arthur Ciener (he’s a reader, and will probably hate that I described him as “venerable”) shared with me at the SHOT Show that one of the most successful marketing campaigns he’s ever run was a small ad in Shotgun News that read “Silencers are Legal.”  Another old can-maker pal of mine told me how back then yokels would come up to his gun show suppressor table and helpfully advise: “D’awww, don’ cha ya know, those things are Eee-legal!”

I believe that given the millions of suppressors sold since those days, and with the mainstream advertising of suppressors that sound suppression has gone mainstream.  When my wife Karmen took her first pistol training class a few years back (she’s from Estonia, which lacks a gun culture) the instructor started her with a suppressed 22 pistol.  The lack of recoil and sound meant she didn’t develop a flinch, and she could do without hearing protection and better hear the instructor.  Once she mastered the basics, she was gradually and comfortably moved up into larger calibers and unsuppressed pistols – with suitable hearing protection.

Suppressors are so mainstream that one of my gun-nut lawyer pals who’s still uncertain about open carry rights is an avid can collector.  Also, I just started typing “Hearing…” into Google, and the second suggestion was “Hearing Protection Act.”  This is not obscure industry-insider stuff anymore.  Even the NRA is openly advocating for the Act.

The right to muffle is such a common sense concept that even an extreme anti-gunner would have few arguments to make.  I’m probably dreaming to think that Obama would sign a law, but it’s easy to imagine a President Trump signing the Hearing Protection Act – one of the best-named bills I’ve heard in a long time.

Do Suppressors Have Anything to do with Crime?

The loudest argument against suppressor rights would probably be that loud guns help cops catch criminals.  There’s probably no evidence that this is true, though I might wonder about those urban shot locator systems that supposedly let cops acoustically locate the source of a gunshot to try to catch an illegal shooter. 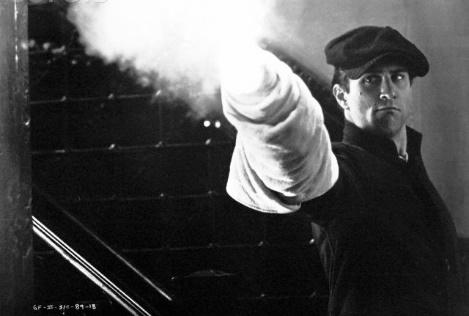 My response is that there probably aren’t any cases in which crimes were prevented by this system.  More importantly, it’s easy to muffle a gunshot without a legal suppressor.  This is much easier than making a zip gun.  A towel wrapped about the muzzle will do the trick (I learned that in Godfather II – see picture at right).  One goofy old movie had a rifleman putting a potato on the muzzle of his rifle.  A plastic soda pop bottle over the muzzle of a gun, with some duct tape does the job.  Frankly, it’s easy to beat the arguments of the other side with their own ammo: the movies.  A criminal willing to risk violating laws against robbery or murder – and laws against criminals having guns – is not going to care that muffling a gunshot, or possessing a device to do that is also illegal.

And let’s not forget that criminals currently are NOT muffling their shots, or using simple devices to make them quieter.  Criminals don’t care, and even if there were a suppressor that went along with every stolen gun there’d be no reason to think that crime would increase or law enforcement efforts would be stymied.

Oh, and most suppressed centerfire guns simply aren’t all that quiet.  I’d like to see and hear a viral YouTube video that compares suppressed gunshots to other familiar sounds, like nail guns, balloons popping, cap guns, firecrackers, party poppers and hand claps.  It would show that suppressed guns aren’t silent, and are still loud enough to assure those who think that the audible report of a gunshot is a critical deterrent to crime.

I’ll let others make more arguments in favor of this law.  I’m simply pointing out that the landscape might make this reform realistic, and THAT is something you should be prepared for.

Are You Ready for the Revolution?

When the landscape changes, some businesses adapt, some suffer, and others thrive.  If you aren’t ready for change, you’ll probably suffer.

The simple reaction to this possible legal reform would be to conclude that if the Hearing Protection Act passes, existing suppressor companies will be well-positioned to drastically increase their sales and profits.  Other companies will enter the market to get part of the new customer base.

Currently, you can buy a cheap can for under $500, and a pricey one for over $1000.  I believe that legal reform would lead to entirely new segments of the market.  If the transaction cost were no more than a background check, then there’s no limit to how low prices can go.  When suppressors were a $5 hardware store item back in the 1930s, a new $200 tax caused demand to drop to zero.  In fact, it was years before the first tax was collected on a suppressor after the defacto ban was enacted.  Removing the tax might just jolt the market nearly back to the $5 hardware store days.

The $200 tax and other headaches mean that only high-value suppressors are profitable, and these are produced at relatively low production volumes.  That will change.

I can imagine a disposable plastic suppressor (one time use, perhaps) that costs a few dollars to make, and a few more bucks to buy.  Maybe it doesn’t suppress much, but it keeps you from damaging your ears in a defensive shooting with your carry gun.  Maybe your home defense AR-15 has a pop-bottle adapter, or a full plastic can that’s just strong enough to survive one magazine without blowing up in your own face.

The innovation challenge is: What will $49 suppressors look like?  How can you make something that suppresses some sound without risking injury to the owner at minimal cost?  The answer won’t be titanium or precision machining.  But the answer might very well be patentable!

And before you envy the current suppressor market leaders, consider this: What will happen to the market when Smith and Wesson decides that it’s time to make their own cans?  If it’s just another assembly of machined parts (even a durable lifetime suppressor) it costs little to make, and adds tremendously to the value of a pistol.  Maybe Ruger will look to buy an existing suppressor company for its expertise, but I don’t think reputation will be a big factor in the new market.  Go down to a public gun range and ask an average guy what suppressor companies he can name – you won’t get many answers.

When I told Karmen about this new law, and that I was going to write about it in the newsletter, she scoffed: “You just want them to invent things so you can patent them!”  Ok maybe – guilty as charged.  But I’d rather my clients and readers be the leaders in the great wave of suppressor inventions than all your competitors.

I’ve often said this before: If you know of a new technology (or regulatory change) that could transform your market, the thing to do is to get your best people together in a room, perhaps with some adult beverages, and have a freewheeling creative session in which you come up with all the possibilities of what the future will look like.  If you come up with a few really good ideas, you could actually patent them now.  A provisional application gives you a year to rethink it at nearly no cost, and gains you the critical First-to-File status.  If you think that no one else was already thinking about these ideas, they are now.

Keep in mind that what you apply to patent doesn’t need to be legal or marketable yet.  And you certainly don’t need CAD drawings or a working prototype.

All these new developments and new market segments will be ripe for new branding strategies.  An old $1500 titanium suppressor deserves an imposing and impressive trademark suggesting durability and precision.  But a $49 plastic suppressor is a different animal.  PuffMuff, PopFart and PewMin are silly examples, and that’s just the onomatopoetic letter P.  These are weak examples, and I’ll save my best branding efforts for my clients that need my help.  In the new market, suppressors won’t be “cool” any more.  They’ll be popular, fun, essential, healthy and responsible.  Which sounds like I’m advertising some new breakfast cereal – which is an example of how the smart marketers who break out of old ways of thinking will wisely look at the market.

Don’t forget domains.  Pistol companies should grab the appropriate domains like springfieldsuppressors.com.  Remember that the market will broaden by a factor of 10 or more, to people who never even thought about owning a suppressor.  When you generate new technology, you generate new brands, which means new domains.

The key is that when you see changes on the horizon, only leaders who continue to innovate aggressive will keep their lead, while upstarts will have a grand opportunity to knock off the big boys.  Let me know the great ideas you have for a new quiet generation of shooting!